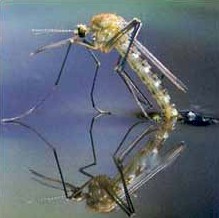 Mosquitoes are insects belonging to the order Diptera, the True Flies. Like all True Flies, they have two wings, but unlike other flies, mosquito wings have scales. Female mosquitoes’ mouthparts form a long piercing-sucking proboscis. Males differ from females by having feathery antennae and mouthparts not suitable for piercing skin. A mosquito’s principal food is nectar or similar sugar source.

There are over 2500 different species of mosquitoes throughout the world; about 200 species occur in the United States with 51 species occurring in Idaho. Each mosquito species has a Latin scientific name, such as Anopheles quadrimaculatus. Anopheles is the “generic” name of a group of closely related mosquitoes and quadrimaculatus is the “species” name that represents a group of individuals that are similar in structure and physiology and capable of interbreeding. These names are used in a descriptive manner so that the name tells something about each particular mosquito, for example, Anopheies – Greek meaning hurtful or prejudicial and quadrimaculatus – Latin meaning four spots (4 dark spots in the wings). Some species have what are called “common names” as well as scientific names, such as Ochlerotatus taeniorhynchus, the “black salt march mosquito.”

Scientific investigators (taxonomists) are constantly looking for new mosquitoes, as well as reviewing previously identified specimens for new information or identifying characteristics. Better microscopic equipment developed in the last 20 years has improved the taxonomist’s ability to determine differences between species. Recently such a review by DR. John Reinert (2000) led to a change in the name of many mosquitoes belonging to the genus Aedes. Using improved methods and over 30 years’ experience he elevated a subgenus of Aedes (Ochlerrotatus) to the status of genus. This will necessitate the renaming of many mosquitoes previously named Aedes to the genus Ochlerotatus and the rewriting of many taxonomic keys important to public health entomologist working in mosquito control. 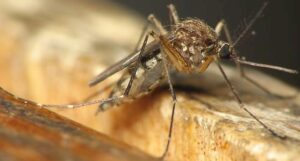 The Spanish called the mosquitoes “musketas,” and the native Hispanic Americans called them “zancudos.” “Mosquito” is a Spanish or Portuguese word meaning “little fly” while “zancudos,” a Spanish word, means “long-legged.” The use of the word “mosquito” is apparently of North American origin and dates back to about 1583. In Europe, mosquitoes were called “gnats” by the English, “Les moucherons” or “Les cousins” by French writers, while the Germans used the name “Stechmucken” or Schnacke.|” In Scandinavian countries mosquitoes were called by a variety of names including “myg” and “myyga” and the Greeks called the “konopus.” In 300 B.C., Aristotle referred to mosquitoes as “empis” in his “Historia Animalium” where he documented their life cycle and metamorphic abilities. Modern writers used the name Culex and it is retained today as the name of a mosquito genus. What is the correct plural form of the word mosquito? In Spanish it would be “mosquitos,” but in English “mosquitoes” (with the”e”) is correct.

Anopheles
Anopheles freeborni, the Western Malaria Mosquito, overwinters in sheltered locations and emerges in early spring.  The species is one of the first biters of the season, attacking when the air is still cold. They bite freely from dusk to dawn. Females lay eggs in permanent water sources associated with poor irrigation practices.

Aedes
Aedes vexans, the Inland Floodwater Mosquito, overwinters in the egg stage and there are generally one or more broods per season.  Irrigation practices with poor drainage suits this species well.  The females feed in shady places during the day and can be particularly annoying at dusk and after dark. They are troublesome biters and have a flight range of 1 to 5 miles.

Aedes nigromaculis, the Irrigated Pasture Mosquito, is a common pest mosquito of the agricultural communities and surrounding areas of southern Idaho.  It is a ferocious biter, inflicting a painful bite.  It is a strong flyer and may migrate several miles from its development site.  The primary habitat of this species has been largely created by agriculture, irrigated pastures are the most common development sites.  The winter is passed in the egg stage with hatching occurring within hours of flooding.

Culiseta
Culiseta inornata, the Winter Marsh Mosquito, prefers to feed on larger mammals, and at times, is very troublesome to livestock. Active biting by this mosquito can occur during the fall.  Dusk is the most common time for biting activity.  They are active flyers and can disperse 5 to 10 miles from their emergence sites.

Culex
Culex pipiens, the Northern House Mosquito, is named so because of its close association with human habitation.  The species is considered a domesticated mosquito species because of this close association.  It is a multi-brood mosquito and eggs are laid in rafts in temporary and permanent sites, such as catch basins, retention ponds, road side ditches, and any open container where water may hold for ten days or longer.  Birds are the preferred hosts for this mosquito.  Culex pipiens is a vector of Western Equine Encephalitis, St. Louis Encephalitis, and West Nile virus.

Culex tarsalis, the Western Encephalitis Mosquito, overwinters in protected places such as cellars, outbuildings, culverts, animal burrows and other sheltered locations.  Upon emerging, the female seeks a blood meal to mature her eggs.  Preferred development sites include temporary to permanent water sites such as marshes, waste irrigation water, ditches, retention ponds, catch basins, and open containers.  Females are persistent biters and prefer birds in the spring, then later turn to mammals and humans as a source for a blood meal.  Culex tarsalis is a vector of Western Equine Encephalitis, St. Louis Encephalitis, and West Nile virus.